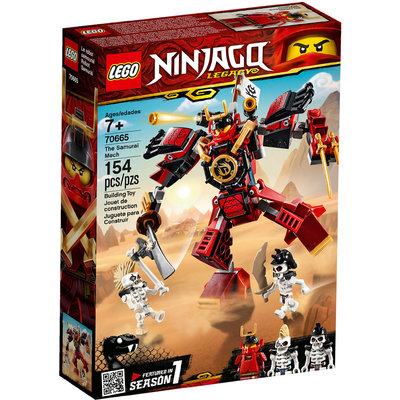 Team up with Nya—disguised as Samurai X—and drive the LEGO® NINJAGO® Legacy 70665 Samurai Mech into battle against Kruncha and Nuckal. The highly posable toy Samurai Mech features an opening minifigure cockpit, 2 stud shooters, posable arms and legs, a big katana and a double katana. This LEGO NINJAGO set also includes 3 minifigures with cool weapons to bolster your samurai battle games as you recreate classic scenes from the NINJAGO Masters of Spinjitzu TV show.

We have found this set in 3 shops shops of our prices comparator and compared the offers. The lowest price for 70665 - The Samurai Mech currently is £12.75 (excl. Shipping). You save £2.24 compared to the recommended price, buying it at 15% less!

Price history for The Samurai Mech

Similar to The Samurai Mech