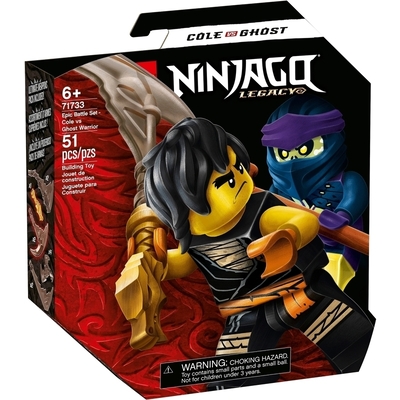 Get LEGO® NINJAGO® fans playing out imaginative and fun battles with this brilliant Epic Battle Set- Cole vs. Ghost Warrior (71733) playset. It features a brick-built marketplace with a hanging lantern and a spinning battle platform, so kids can escape to a fantasy world to enjoy hours of role-play action.

Playsets to inspire creative activities
This ninja battle toy features 2 minifigures: a new-for-January-2021 Cole and a Legacy Ghost Warrior from the LEGO® NINJAGO® TV series. The playsetprovides kids with all they need to stage fun clashes to see who wins the 4 black weapons.

The best cool toys for kids
LEGO NINJAGO playsets encourage kids to step away from their screens to enjoy daring adventures in a fantasy world. Here they can learn valuable life skills and team up with their heroes playing with an exciting collection of ninja toys including mechs, planes and dragons.

LEGO Ninjago 71733 - Epic Battle Set Cole Vs. Ghost Warrior is part of the Ninjago category. It has been published in 2021. The recommended price is £8.99.

We have found this set in 5 shops shops of our prices comparator and compared the offers. The lowest price for 71733 - Epic Battle Set Cole Vs. Ghost Warrior currently is £8.42 (excl. Shipping). You save £0.57 compared to the recommended price, buying it at 6% less! 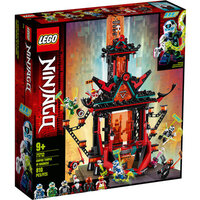