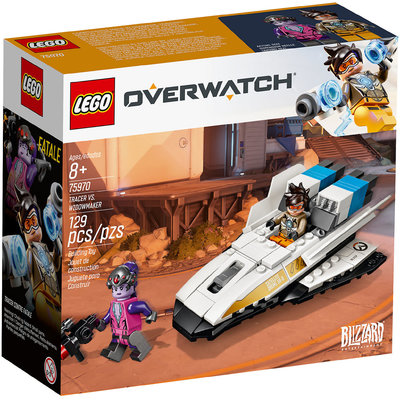 Immerse your favorite Overwatch® fan in epic missions with this LEGO® Overwatch 75970 Tracer vs. Widowmaker set. Based on the internationally acclaimed team-based action game, this set recreates the drone satellite from the Watchpoint: Gibraltar map where Overwatch heroes Tracer and Widowmaker battle for control of the payload. With weapons for the heroes and space in the drone satellite to sit a minifigure, youngsters will love playing with this set's instantly recognizable characters and setting. Older fans will love to show their passion for Overwatch by displaying the set by their gaming setup for all their friends to see.

We have found this set in 5 shops shops of our prices comparator and compared the offers. The lowest price for 75970 - Tracer Vs. Widowmaker currently is £13.72 (excl. Shipping).

Price history for Tracer Vs. Widowmaker

Similar to Tracer Vs. Widowmaker