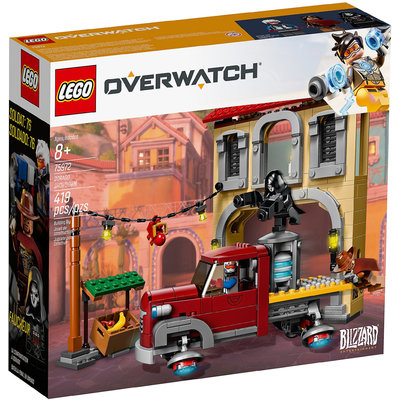 Now your favorite Overwatch® fan can build an iconic Dorado building and payload truck with LEGO® Overwatch 75972 Dorado Showdown! Based on the internationally acclaimed team-based action game, this Overwatch building set features an instantly recognizable building from the popular Dorado map and 3 characters, Soldier: 76, Reaper and McCree. With Overwatch weapons, Dorado building, and a payload truck like in the game, fans of Overwatch will want to build and display it for their friends to see, while youngsters will like playing with the vehicle and mini market building from the game.

LEGO Overwatch 75972 - Dorado Showdown is part of the Overwatch category. It has been published in 2019. The recommended price is £29.99.

We have found this set in 5 shops shops of our prices comparator and compared the offers. The lowest price for 75972 - Dorado Showdown currently is £23.49 (excl. Shipping). You save £6.50 compared to the recommended price, buying it at 22% less!