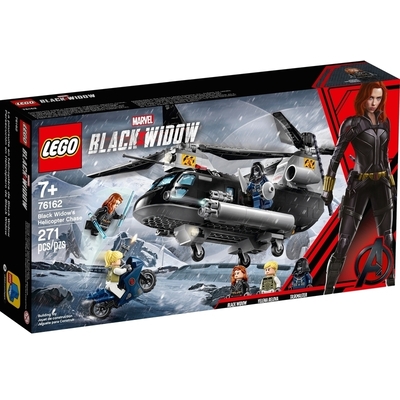 With LEGO® Marvel Avengers Black Widow’s Helicopter Chase (76162), young superheroes can join forces with Black Widow and Yelena Belova to take on Marvel super villain Taskmaster in his awesome armed helicopter. Superhero action and adventure! Taskmaster's helicopter has 4 stud shooters and a rifle on each side. The 2 spinning rotor blades give it the power and precision needed to launch an attack. An opening cockpit allows the Taskmaster minifigure to be placed inside, and the cargo area opens to release Taskmaster’s buggy. Yelena Belova has 2 shooters and Black Widow carries 2 sticks as she arrives on her motorcycle. When Taskmaster gets out of his helicopter, he holds a sword and shield. Inspire young imaginations with LEGO Marvel Avengers LEGO Marvel Avengers playsets open up a thrilling universe of role-play adventures. With collectible vehicles, mechs, buildings, minifigures, weapons and gadgets, kids can recreate favorite movie scenes and devise imaginative stories of their own. 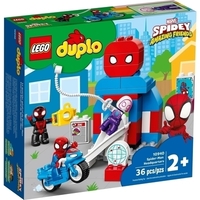