Dare to enter the Mystery Mansion and find the treasure before midnight! Evade the morning star pendulum and man-eating plant, and find the treasure at the Mystery Mansion before the Vampire appears at midnight! Speed to the Mystery Mansion on the motorbike with Shaggy and Velma to help Daphne and Scooby-Doo find the stolen treasure! Creep quietly into the spooky building and watch out for the Ghost and Black Knight lurking in the corridors. Evade the man-eating plant in the conservatory and dodge the morning star pendulum trap. Quickly make a giant hamburger in the kitchen then look for clues. Locate the secret compartment containing the golden key, then open the safe containing the stolen gold bars. But hurry-you must find the hidden loot before the clock strikes midnight and the Vampire emerges from behind the spinning wall! Includes 6 minifigures with assorted weapon and accessory elements: Shaggy, Velma, Daphne, Vampire/Bob Oakley, Ghost/Bluestone the Great, Black Knight/Mr. Wickless, plus Scooby-Doo (standing version). Mystery Mansion features a clock tower with midnight spinning wall function, roof with vampire coffin, conservatory with broken windows, man-eating plant with ‘snapping mouth’ and 2 pumpkin heads, kitchen with cupboards, sink, pot and giant buildable hamburger, brick-built morning star pendulum trap, opening safe with 3 golden bar elements, hidden compartment with golden key, special brick with a mystery clue, pot, skull minifigure head, rat and bat elements. Motorbike features a sidecar. Weapon elements include the Ghost’s ball and chain, and Black Knight’s double axe. Accessory elements include Scooby-Doo’s bone, Shaggy’ s sausage, Shaggy’ s backpack, Velma’s camera, the Vampire’s cape and bat, and the Ghost’s glow-in-the-dark cape. Seek out the hidden gems at the Haunted Lighthouse! Help Scooby-Doo and gang find the treasure in the Haunted Lighthouse with secret compartments and skull cave, plus speedboat and water skis. Investigate the creepy Haunted Lighthouse with Scooby-Doo and the gang! Steer the boat with Daphne and Scooby, while Shaggy rides the water skis. Dock at the foot of the rocks, by the light pole. Move the planks with the crowbar and reveal the map with the clue to find the golden key. But beware! The Lighthouse Keeper and Swamp Monster have been hiding in the skull cave and are ready to ambush meddling kids. Battle past them, avoiding capture in the prison. When you reach the top of the lighthouse, open the secret compartment holding the golden key. Then seek out the hidden treasure chest under the lighthouse and reveal the villains’ true identities! Includes 4 minifigures with a weapon and an accessory element: Shaggy, Daphne, Lighthouse Keeper/Verona Dempsey and Swamp Monster/Mr. Brown, plus Scooby-Doo (sitting version). Haunted Lighthouse island features a lighthouse tower with balcony, translucent orange flame elements and secret compartment with golden key, prison with opening door, kitchen with oven, pan, cheese and rat elements, light pole, secret compartment with map/clue beneath movable planks, secret compartment with treasure chest containing 2 gem elements and a silver-colored cup, wheel-operated opening skull cave with a crate inside containing crowbar, air tank and flippers, trident, ‘Keep Out’ sign and seaweed elements. Speedboat features a windscreen, steering wheel, paddle, engine with rotating propeller, and water ski elements with attachment line. Solve the Zombie mystery with The Mystery Machine! Escape from the Zombie and the spooky tree in The Mystery Machine with spy glass, computer screens, camera and a giant sandwich. Escape from the spooky forest with Scooby-Doo, Fred and Shaggy! Avoid getting trapped in the branches of the spooky tree and jump into The Mystery Machine to get away. Read the clue and open up the back of the vehicle to use the computer screens, spy glass and other mystery-solving equipment. Work out the real identity of the Zombie who is secretly operating the tree. then celebrate with a giant sandwich! Includes 3 minifigures: Fred, Shaggy and Zombie/Zeke, plus Scooby-Doo (standing version). The Mystery Machine features a driver’s cabin with steering wheel and space for 2 minifigures, removable roof and foldout sides for easy play, stove, sink and spigot and assorted accessory elements including: spy glass, camera, torch, tape recorder, 2 computer screens, special brick with a mystery clue, gem, mug and a giant sandwich. Drop hamburgers on the Headless Horseman and reveal his true identity! Fire the Mystery Plane’s hamburger flick missiles and swing down to reclaim the stolen golden cup and unmask The Headless Horseman. Chase the Headless Horseman with Shaggy and Scooby-Doo and reclaim the stolen golden cup! Search for clues and take off in the plane. but does Shaggy even know how to fly a plane? Too late to worry about that now! Leave Scooby sitting in the cockpit and swing down on the chain with Shaggy to try and grab the precious cup. Fire the hamburger flick missiles to knock the Headless Horseman off his horse. Then rip off the pumpkin-head disguise to reveal the villain’s true identity! Includes 2 minifigures with a weapon and assorted accessory elements: Shaggy, Headless Horseman/Elwood Crane, plus Scooby-Doo (sitting version). Mystery Plane features a cockpit for Shaggy and Scooby-Doo, hamburger-drop function, 2 brick-built hamburger bombs, chain with handle, rotating propeller and landing wheels. Investigate the Mummy Museum Mystery with Scooby and Shaggy! Solve the Mummy Museum Mystery with Scooby-Doo and Shaggy including opening sarcophagus and secret compartment in stairs with gem elements. Enter the spooky museum with Shaggy and Scooby-Doo and solve the mystery of the missing gems! Jeepers, it’s a creepy place-our heroes are spooked. and hungry, as usual. But hang on! Are they seeing things or is that a hamburger hanging from the ceiling? Reach for the burger to accidentally open the golden sarcophagus or take off the mummy’s headdress to reveal the mastermind behind the robbery. Then open the secret door in the stairs to reveal the hidden treasure! Includes 2 minifigures: Shaggy and Mummy/Dr. Najib with an accessory element, plus Scooby-Doo (standing version). The Mummy Museum features an opening golden sarcophagus with brick-built hamburger and chain, secret compartment in stairs containing 3 gem elements, spotlight-style elements and a secret file tile with mystery clues. 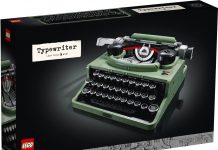 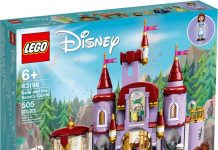 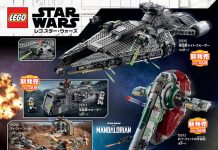 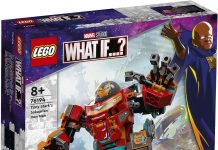 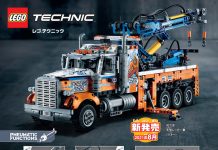 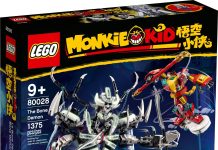 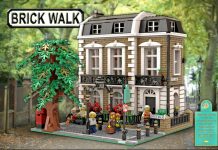 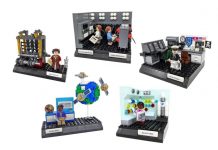